A Dom for Patti by Elodie Parkes ~ Release and GIVEAWAY!

A Dom for Patti, June 16 release from Evernight Publishing

When a fleeting encounter with a handsome stranger ignites Patti’s repressed loneliness, she has to admit she longs for the love of a sensual Dom.

Luck is on her side when she goes out for the evening, and meets delicious Cameron in The Club—but is he all that he appears to be?

Cameron’s overwhelming attraction to Patti is tested when she inexplicably fails to show up for a date—just what is going on and will they ever get together?

Background to the story

Elodie lives in Canterbury with her two dogs. She works in an antique shop by day and writes at night, loving the cloak of silent darkness that descends on the rural countryside around her home.

She has also released titles as an individual indie author.

Elodie only ever wears boots. (Yes, even in summer) She has three bachelor degrees because she couldn’t make up her mind what she wanted to do, and even then she got two Grad Dips in different subjects, naughty Elodie.

Music (her nickname at work is Melody Elodie because she’s often singing), the countryside, the ocean, animals, gorgeous men, technology, art, stockings and garter belts, movies, and potatoes, in any order. Elodie is addicted to black leather jackets, and faded jeans, and owns so many she’s ashamed to count them. 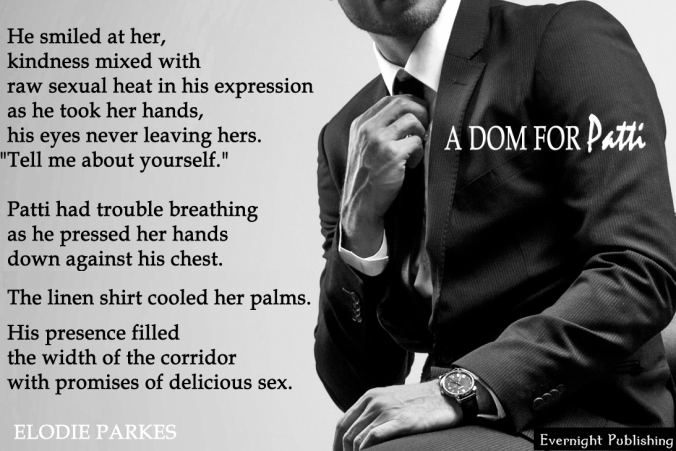 The scene with her tonight enchanted him. He glanced over to where she was dressing.

Patti struggled with the zip of her dress.

Cameron went to her. He fastened her dress and ran his hand along the nape of her neck, turning her to face him.

Cameron’s heart filled with hope at Patti’s tender smile. He handed her shoes over. “Here you go.”

Patti took them. “Thank you, Sir.”

He watched her balance to put them on for a moment before scooping her up and helping as she laughed and clutched his shoulders. Walking with her in his arms, he deposited her on a barstool. “I’d like it very much if you’d call me Cameron.”

She nodded. Her thick blonde hair shone in the light from the bar. The white strip lights reflected in the mirror tiles at the back of the bar sent streaks glistening as she pushed her hair from her face and nodded in agreement. “Yes, Sir.”

Cameron hardened his expression. “I expect you to do as I say, even though our scene is over. I’ve asked you to call me by my name. It will be great if you’d do that.” He turned to the bartender. “Coffee for me, thanks.” He looked at Patti for her order.

She sat sideways on the stool, turned toward him. “For me too. Thank you, Cameron.”

Just how much he enjoyed hearing his name from her lips sent a spike of surprise through him. He stared into her chocolate brown eyes as he pulled the next barstool along and sat to face her. For a whole minute, he drank in the sight of her. With her small rounded nose, the pretty shape of her face, and those oh so kissable lips slightly parted as if she waited for his mouth on hers—she was just right. He gave in to the sweet temptation of her mouth and leaned over to kiss her.

Cameron breathed in the soft scent of her skin as his nose pressed against her cheek. Her response to his kiss sent him hurtling into desire so strong he pushed his hand up between her thighs and his fingertips traced the shape of her slit through the soft fabric of her panties.

A low groan escaped him. He broke away from the kiss. “If you have no Master or wish for a more permanent Dom, I’m inclined to apply for the vacancy.” He murmured the words as he gazed into Patti’s eyes. “I will expect your fidelity. I can’t share you, unless you’re desperate to have a ménage, and then I’ll choose the third partner in our sexual pleasure. I don’t do pain, so fair warning. I do spank when you really ask for punishment by continued disobedience and if it makes you wet…” He stopped talking for a moment as he saw a fleeting emotion in her eyes and knew it did make her wet, and then continued. “I will want some extended scenes with some restraint you’re comfortable with, so that I can fully appreciate your sexy little body and response to my attention—I will take care of you. What do you think?”

Want a chance to win for a $10 PayPal cash giveaway set to run until July 7??? Then join the Rafflecopter giveaway from Elodie Parkes for your chance to win.