A Sit Down with Brook from Dragon's Ward 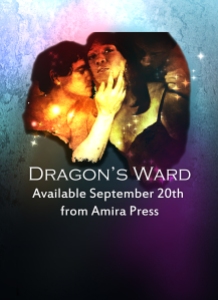 So we got Brook with us today, the main character from the book Dragon’s Ward by LeTeisha Newton. We wanted her to answer some questions, and she agreed, after she got the hell away from her…three…men. (Whoa!)

I’m no character dammit. I’m the phoenix, get it straight.

Better. Now what can I do for you?

What do you consider your greatest achievement?

Have you looked at my mates lately? Stefan, Cadoc, and Nero are, and I achieve with them every night.

Damn gotta get me one of those. Ahem. What is your idea of perfect happiness?

I have it. Can we trash the canned questions? I’ve been running a long time, and I finally don’t have to. I’d like to get back to that.

You said you’ve been running, from what?

My stalker, Roach. He’s been out to kill me for about three years. Well, make me his if you ask him.

You don’t really seem scared at all.

No. I’ve learned not to be. He made me strong, in a weird, backass way. I had to stay away from him. That meant I had to be smarter, tougher, and stronger. I didn’t have a choice. I like living.

Cadoc, Nero, and Stefan helped with that right?

Yeah, but if told you how then what would need to read the book for exactly?

You’re right. Then, the good questions. How you get not one but three men?

To not give any spoilers, they came as a package deal. Stefan started, and boy did he send me for a loop, but I was too afraid, to lost. I couldn’t get past anything but Roach. Then Cadoc came in, all about protecting me. Whoa. That’s a sexy thought. *eyes go dreamy and sexy*

Sorry. Can’t help it. Nero, well Nero is Nero. He was the one I kinda chose first.

Yea. They were worried I’d die taking them all on.

Yea. But I won’t go into that, books secrets and all. But they did. Nero thought that he’d stand beside me whatever way he could have me. He chose me, period, even if only the two of us would never really be complete. So the others fell in line after him.

What is your greatest regret then?

That I didn’t find them sooner.

Not Roach and running?

No. Roach led me to them. Running from Roach put me right in their path. I’l never regret that.

Very. The outcome was perfect for me.

Damn was that a growl? (Did I just feel my panties moisten)

That would be Stefan. I gotta go. It was nice talking to  you. Coming baby.

Damn. She ran out before I could ask her to bring him inside.

Oh well. Brook’s got plenty to do with her men, see their story on September 20th when Dragon’s Ward comes out on Amira Press!!