LeTeisha, thank you very much for welcoming me to your blog. 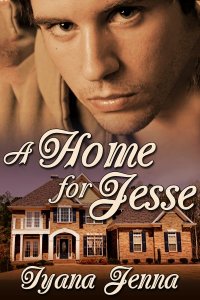 A Home for Jesse

Jesse Gray can’t get more unlucky. His roommate left him and he gets kicked out when he can’t afford the rent. Next, the owner of the fast food joint where he works part-time suddenly tells him he no longer works there. Jesse still has a job as a PA on a movie set but the pay will never be enough to afford even the cheapest room in Hollywood. There’s only one place left to stay the night — in the park.

Trey Miller is the star on a TV series where Jesse works. They bump into each other one night while leaving the set, and Trey thinks Jesse is much too good-looking to only be a PA. When he learns of Jesse’s financial condition, he offers a place to stay at his house. Having no other options, Jesse reluctantly accepts the offer, but what’s the catch?

This ain’t so bad. Jesse pats his laden backpack. He stretches himself on the bench and lowers his head onto the bag, grimacing at the bumps pressing against his head and neck. Awesome. He is going to have major cricks and headaches come morning. That is if he’s not suffering from early signs of pneumonia.

Jesse shifts and grunts and finally gives up. He sits up, takes off his jacket, and spreads it over his front before he lies down again. Moving a bit again to find the most comfortable position, he thinks, Fuck, now my shorts are stuck in the crack of my ass. Jesse reaches down and pulls them free — ah, that’s better.

He takes a deep breath. So he’s a bum now, is he? His ma would be heartbroken if she knew. She could blame him for being such a hard head and insisting on having his own way. Jesse stares blankly at the leaves swaying on treetops, at the shadows of the swings dancing in the dark, at the stars blinking mockingly down at him. At least the fact that they are up there means that the sky is cloudless and Jesse doesn’t need to worry about the possibility of rain tonight. Getting soaked when the only place he has to sleep is this park would be a pain in the ass, not to mention hazardous to his health. Jesse also hopes no cops will come patrolling tonight.

Weary to the bone, Jesse curls both hands under the side of his face and gives in to slumber.

“Come on, Trey, one more glass. Don’t be a spoilsport.”

What one more glass means for Brent must be different from what it means for Trey. They have been here for hours. Trey had sneaked a glance at his watch once. It showed four — and that must have been half an hour ago. Still there is no sign they are leaving soon.

Trey regrets his decision not to drive his own car and ride with Brent instead. Fuck. He’s going to screw up his shot big time tomorrow — or rather, this afternoon.

“What celebration am I spoiling again?” Trey leans forward. Brent looks taken aback but he immediately offers a smile, which looks more like a snake’s sneer.

“Trey, that’s not nice.” He wags his forefinger.

“The hell with nice.” Trey rests his head on his folded arms on the table. “I’d rather be with Jess –”

Oops. He slipped up and said it out loud.

Brent and the others sitting around the table seem to come to a consensus to stop whatever they are doing and switch their attention to Trey.

“Jess? Jess who?” Brent asks. “I thought you were with Kimberly.”

Trey feels blood rush into his face but he sighs inwardly in relief that Brent doesn’t know who he was talking about.

“Kimberly? Right. And you said she’d be here! Where is she, Brenton?”

Brent visibly cringes at the name and Trey feels like guffawing. Eat that, asshat!

“My name’s not Brenton.”

“So what? You haven’t answered my question.”

And neither has Trey, but Brent has forgotten about that. Trey gulps down his drink, and tries to shut down from everything going on around him. 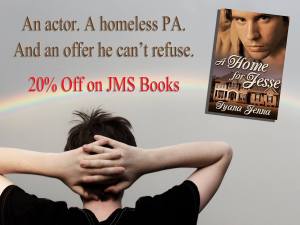 Iyana lives in Jakarta, a city famous for its traffic jams, a lot of cars and motorcycles, and people selling stuff on the roads. You can spend two hours on the road going to a place you can reach in half an hour in a normal situation. Thanks to the traffic jams, though, Iyana can come up with a lot of stories, mostly shorties, as she prefers to spend the time during her trips writing into her cell phone rather than sleeping.

Another thing Iyana loves is kitties. Right now she has five of them. Their names are Larva, Nyil, Cil, Mermood, and Horus. When she doesn’t write, she plays with them, or they would play with her when she writes.