#NewRelease Claimed by her Bears with Dorris O'Connor! 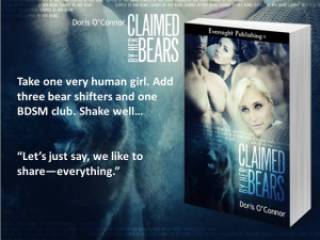 Thanks so much for having me on your blog today with my newest release, Claimed by her Bears.
Based loosely on Goldilocks and the three bears, which happens to be one of my
favourite Fairytales, and originally published as Goldie and her Bears, this
story is really quite special to me. It started my love affair with bear
shifters, and it was my first ménage.
I wrote the original version in a mad typing frenzy over one weekend, when those bears just wouldn’t let me rest, and you know, every bear shifter I have written since,
has been the same. There is something about bears. They tend to be my
raunchiest, most demanding heroes, and these three, are something else
entirely. If you’ve read the original story, you know these bears are very, very
naughty, but you know, they are even naughtier in this version. I’ve learnt a
lot about writing sex since those early days, and delving into everyone’s point
of view in this new and extended version has added another level of hotness. An
extra 30K of hotness to be precise.
*winks*
I had great fun writing these bears, so get ready for some yummy bear shifting kinky shenanigans. J 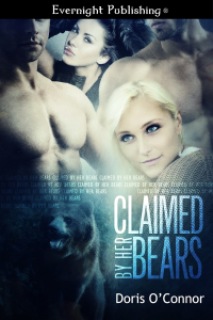