Milan Sinclair is rebellious and stubborn and has a huge chip on her shoulder.
A chip, that Marco Brunetti, the multi-billionaire, Vice President of the Brunetti Hotel and Spa Resorts, put there. As a teenager Milan worshipped the ground he walked on, but not anymore. She’s determined to make Marco’s life, a living hell, after tormenting her for years.
Everyone thinks she and Marco would make the perfect couple, but there are two major flaws in their logic. Firstly, Marco is a philandering playboy and can’t hold a relationship down of any kind, and secondly after blurring the line between family, friends, and lovers for one night years ago, they can’t stop provoking one another.
Marco Brunetti is arrogant and reckless and a committed playboy.  He took Milan’s virginity one drunken night and then she bolted. Now they’re forced together at his sister’s wedding, where they decide to call a truce, for the sake of the family. But how long will this truce last? Or is it just a pretense so Milan can get her ultimate revenge.
Or perhaps their ‘spark’ can be used for more than fighting. That is if they don’t strangle each other first…
GOODREADS

EXCERPT #1
“Like I mentioned before, you’ve changed, Milan. You’re not the same girl I had sex with years ago.”
Her smile widened. “But I bet you are.”
“Care to find out?” I asked. “We could—”
“I’m not so sure about that,” she said and considered me. “I’d really need to think about it. Hard. It’s not like it was the most riveting experience for me or something I’d like to revisit, especially the ending.”
What the fuck? I was trying to call a truce and build a friendship, but she had
to go and throw that insult out there? “The hell it wasn’t,” I growled.
“Oh, you poor darlin’,” she mimicked me. “You don’t agree with me?”
I moved in on her, my heart pounding. “Don’t you lie to me, Milan. I know you enjoyed it.”
She smirked at me, looking completely and perfectly composed while I was about to flip my shit. “So now you think you can read my mind and understand me better than I do? How the fuck would you know what I enjoy and don’t enjoy?”
She might get away with talking shit to other men she’d been with, but I wasn’t putting up with her crap. I backed her up to the wall, boxing her in. Leaning so close that our chests touched, I pressed my hands against the wall on either side of her head. Getting this close to her was dangerous and stupid, but so delicious. And it felt fucking amazing.
I caught her gaze. “It might have been your first time, but it wasn’t mine. I know for a fact you enjoyed every single thing I did to you that night. Especially when I buried my head between those sweet legs of yours and made you scream my name so loud you could’ve woken up the entire town. There’s no faking the way your pussy clamped down on my finger when you came.”
“Lucky me. You’re going to have to do more than dirty-talk me to get me to have sex with you again,” she replied, her breath coming out unsteadily, despite her smooth expression.
I ran a finger down her cheek, caught her chin, and tipped it up. “I bet you’d love it if I kissed you right here. Maybe you’d even like me to take you up against the wall.” I pressed my hips against hers, rolling them in a gentle circle, and she let out a tiny moan. The sound went straight to my cock. “You could wrap your legs around my waist, and I could bury myself deep inside of you where you need me. All you have to do is ask me nicely.”
“I’m not asking you for anything,” she breathed, her eyes flashing a challenge at me. “So don’t hold your breath.”
I pressed closer, rolling against her core. “I noticed you haven’t asked me to let go of you yet, either.” I lowered my face to hers. “You want me to kiss you. Touch you. Fuck you. Admit it.” Another small moan escaped her, and there was no denying the desire in her eyes.
“Just do it already, damn it.”

“Oh, my God, you’re so crude!” Milan said, sounding shocked. Her face flamed and she took off down the corridor. I followed her.
“Stop acting so innocent with me, Milan.” I catch up to her as she heads for the laundry. She grabbed some clothes from the basket on the bench and made a move to get past me but I pushed her up against the doorframe.
“Mmm…the laundry?” I smirked, raising my brows. “Now that’s an idea.”
“No way,” she scoffed, shoving at my shoulders. The clothes she held floated to the floor.
“What? You don’t like the idea of having sex in here. We could get very creative. And come on…don’t you want to hear the rest of what I have to say?”
“Say? About what?”
“You and I are going to create a storm once we’re together. You want me to tell you what else I’m going to do to you?” I slipped my fingers underneath her dress and inside her underwear, instantly silencing her protests. She groaned when I plunged my fingers into her heat. “This wetness is all for me, Milan. You have always been mine.” I felt a strong wave of determination to have her. She was driving me crazy.
“No…I… What?” Her eyelids were closed and she opened them in a haze of arousal, tossing her head back as I stroked inside her. “Yours? Never!”
“That’s what you say, but what you feel and what I can feel on my fingers is something totally different.” I couldn’t help myself. I wanted to push her and rile her up until she conceded. I was desperate to hear her say she wanted me. Fuck, I needed her to say it.
Milan attempted to pry my fingers out of her core. “I belong to no one, Marco, especially not you,” she said through gritted teeth. “Yes, I admit you arouse me. You’re experienced and can make me come, but that’s it. I don’t belong to you.”
“Bullshit!” I throw back at her, continuing to thrust my fingers in and out of her. “You little liar. You’re mine, Milan. Face it and admit it. It’s the truth.”
She had no comeback. It was a first for Milan but I dared not voice that aloud or she may have kicked me in the balls and I was quite fond of them. Her breathing became more rapid and choppy as my fingers glided over her piercing. I stopped and she gaped at me as if her world had ended. “If you keep staring at me with that pouty mouth, Milan, I may just have to find something to put in there and keep it busy for a while.”
I hoisted her on the Caesar-stone bench top, above the Miele washing machine, which I noticed was heading towards the spin cycle. I stripped off my shirt and threw it over my head, not caring where it landed.
“Must you be so rude all the time? And why the hell are you taking your shirt off? Is it dirty? Do you need to wash it?” she said with sarcasm.
“I want to fuck you on top of the washing machine so we can feel the vibrations as we fuck. Or would you prefer to fuck somewhere else? In your father’s office or maybe the kitchen like I suggested?” I asked. “Or would that be too risky and scandalous for you?”
Milan’s mouth was still open but her eyes lingered on my exposed chest and my pierced nipples. “You have such a dirty mind. It’s true; you really are a manwhore, aren’t you?”
Ignoring her, I proceeded to slip off my pants, very slowly, making sure she watched my every move. “Manwhore?” I taunted. “Darlin’, you haven’t seen anything yet.”
“Fuck, stop, Marco. Stop stripping your clothes off. Why are you being such a dick?”
“You know the answer to that.” I grinned. “You gotta live a little, and I’m betting having sex in a risky place was on that list of yours. I’m only making your dreams come true by fucking you in here. It’s here or we move across the hall to your father’s office. It’s totally up to you.”
“No fucking way,” she yelled at me, but she made no move to leave. She sat there, her eyes raking over my nakedness and erect cock.
“So, tell me then …” I said as I pulled on my cock from base to tip, stroking it up and down trying to gauge a reaction out of her. “What would you prefer to do first?”
“Shut up, Marco!” she said, trying to make her way out the door but I intercepted her departure. 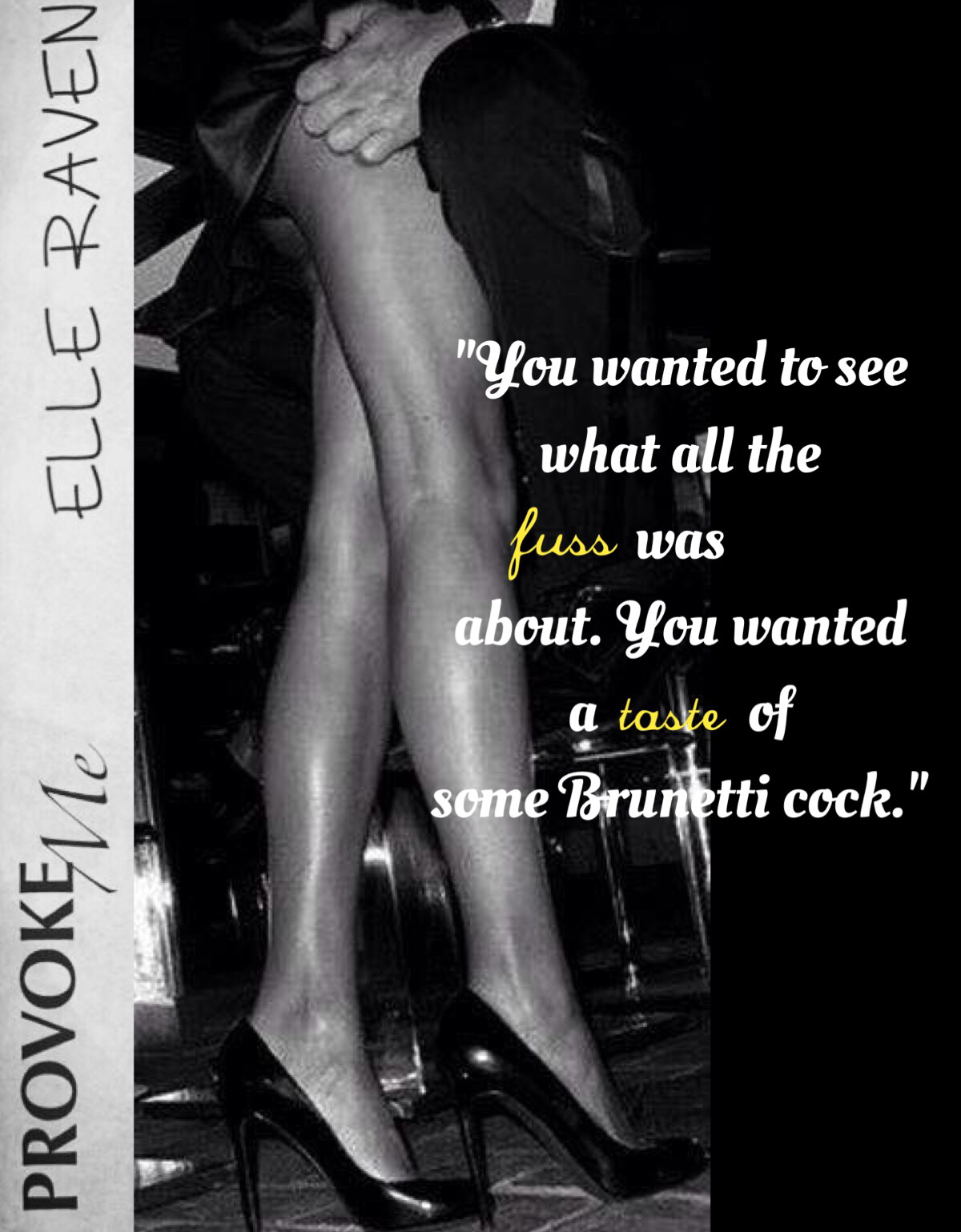 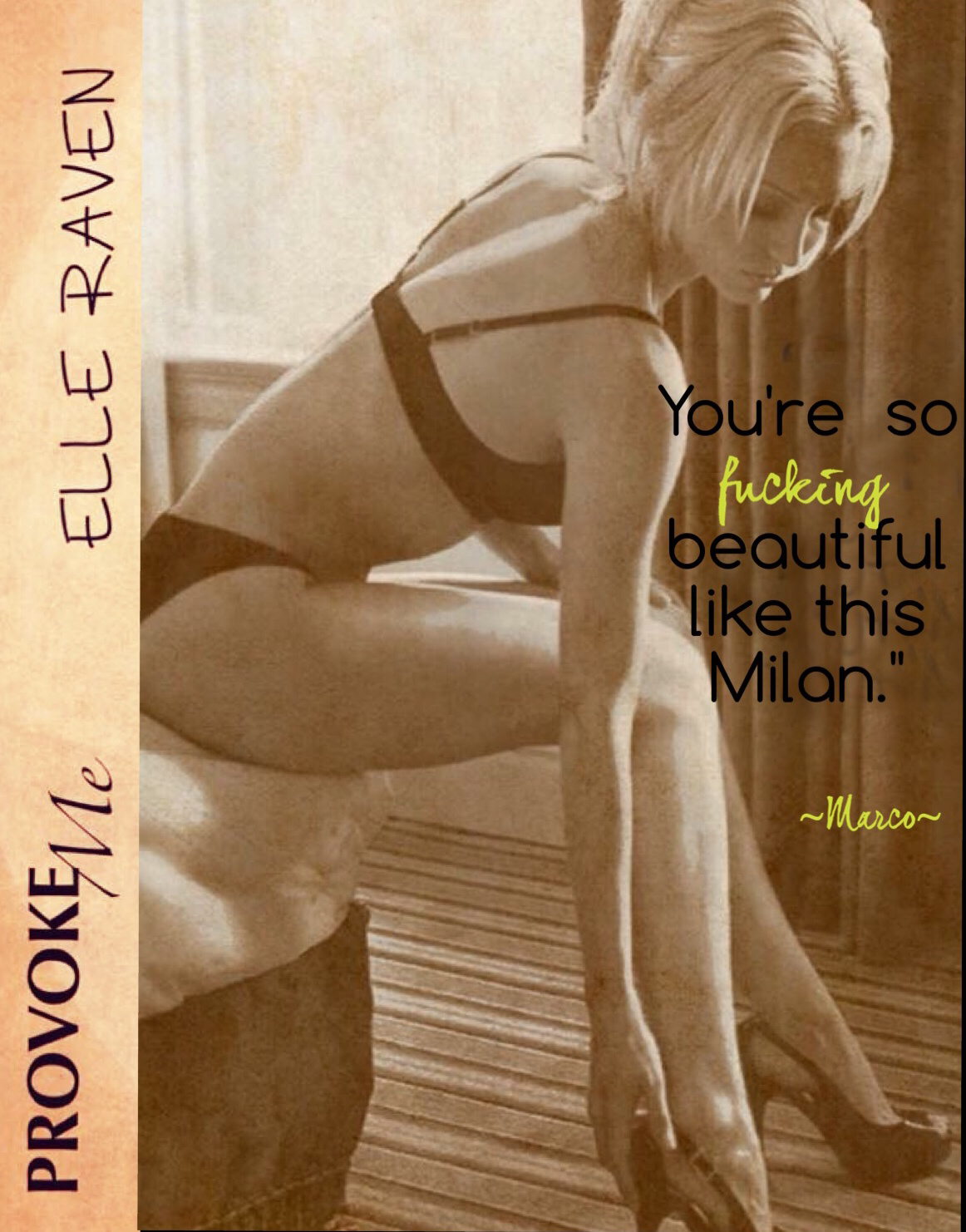 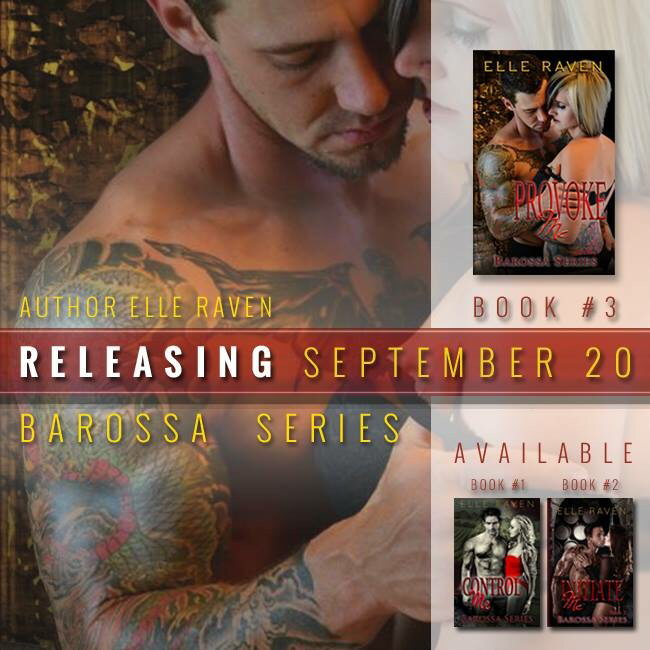 Elle Raven is a new and upcoming Aussie author who lives in Adelaide, South Australia with her husband and three young children. Elle can usually be found with her iPad or laptop computer permanently glued to her. She began writing from a very young age. In fact Elle used to write plays and musicals when she was in high school. Having such a flamboyant personality she even performed in them herself Always an ‘actress’ and always the star.

Elle loves reading and writing about an alpha-male hero. If she can’t read about one that is alpha enough to suit her she will take it upon herself to write one.
Elle’s books will feature an alpha-male hero who will come tumbling to his knees in lust and love when he finally meets the heroine of his dreams. Rest assured that in an Elle Raven book, the hero will never cheat.
Elle would love to hear from you. Please email her or visit her Facebook page. She loves connecting
with people and having a chat with the readers about her books or any other books you may have in common.