School teacher, Julianne Matthews, has been married to her own real life Prince Charming, the hunky Jared Matthews, for over a year and they couldn’t be happier. That is, until Jared invites his old college buddy, Cole Richardson, to be a guest in their home for the weekend. Cole is a wealthy investment banker from out of state and has been toying with the idea of going into business with Jared for some time. The weekend was supposed to be all about sorting out the details of that business but when these three get into a room together for the first time, the chemistry among them is something none of them had planned for. Julie realizes that she’s just as attracted to Cole as she is to her husband and would like nothing more than to be sandwiched between the two hot men in bed. However, she knows that will probably never happen and feels completely guilty for even thinking about it. Imagine her surprise when she finds out that neither man finds the idea repulsive in any way and that they had both been having similar thoughts all along. What will become of Julie’s perfect marriage when her husband’s house guest gets invited into their bedroom? 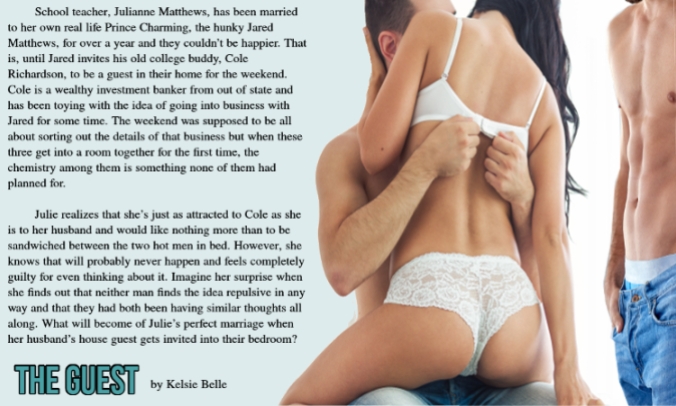 Couple having sex, man take off bra of girl in his lap

Julie Matthews had one of the most wonderful husbands a girl could ever ask for. Jared was a man whom she knew many of her friends envied her for. Good looking, caring, attentive and great in bed, he was the perfect package—there was absolutely no need for her to have a wandering eye.

But his college buddy, Cole Richardson, was something else entirely. He was simply beautiful, with a face any male model would die for and the kind of rangy frame that alluded to subtle yet potent strength. Where Jared was light, Cole was dark. Where Jared was thick and ropey, Cole was lean and sinewy. The two men had very little in common physically, yet she was just a drawn to Cole as she had been to Jared when they had just met. It was crazy, but right off the bat, she’d found herself wondering what kind of lover Cole would be—the gentle, attentive kind who liked to take things slow and easy or the fiercer, more intense kind who would want to break her to his will?

Then a totally unexpected thought sprang into her mind. What would it be like to have both men, so very different yet so alike, attending to her every sexual need at the same time? Each one loving her, worshipping her body in his own unique way. She could imagine it now—heaven on earth, bliss beyond her wildest dreams. She’d probably come a thousand times in that one eventful night, as her senses were inundated with pleasures untold. 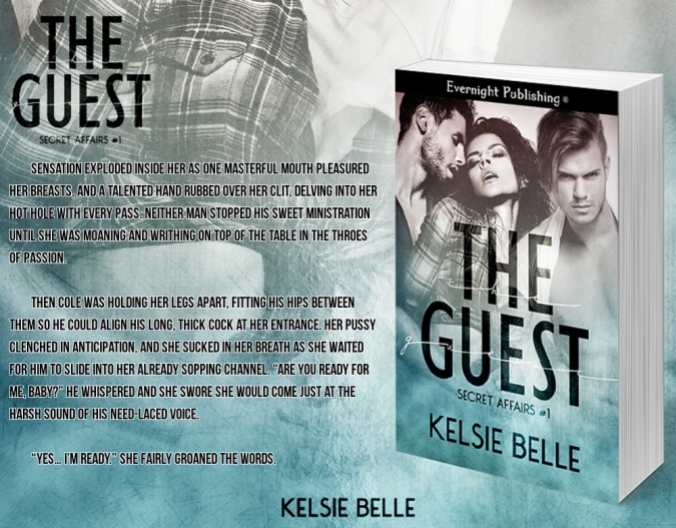 She licked her lips, then slowly shook her head. “N-no. I don’t mind at all.”

“Good,” Jared said with a smile. He walked over to her, cupped one breast and squeezed it gently. “Lie back for me, sweetheart.”

Julie hurried to obey him, lowering herself to the table again. Jared’s head followed her down, his mouth closing over her nipple and began go lick and suck the firm bud. At the same time, Cole rose from his knees and his hand replaced his head between her legs. Sensation exploded inside her as one masterful mouth pleasured her breasts, and a talented hand rubbed over her clit, delving into her hot hole with every pass. Neither man stopped his sweet ministration until she was moaning and writhing on top of the table in the throes of passion.

Then Cole was holding her legs apart, fitting his hips between them so he could align his long, thick cock at her entrance. Her pussy clenched in anticipation, and she sucked in her breath as she waited for him to slide into her already sopping channel. “Are you ready for me, baby?” he whispered and she swore she would come just at the harsh sound of his need-laced voice.

Without further delay, Cole rocked his hips forward, sinking his cock into her pussy. Inch by inch, he slowly pushed into her, stretching her tight walls until finally he was fully seated inside her. Her pussy convulsed around him, adjusting to his size and he groaned. “Oh damn, you’re a snug fit.”

Then he began to move, thrusting into her with a gentle rocking of his hips. Julie cried out, loving the feel of his cock working her pussy so skillfully. At the same time, Jared released her breasts and stood, moving his hips closer to her face so that his cock was in line with her mouth. She turned her head to the side and parted her lips, allowing him to ease his massive member between them. Knowing exactly how to please him, she began to suck on the wide head of his cock, sliding her tongue over it as she did so.

He sank his fingers into her hair, holding her head steady so he could gently pump into her mouth. She hollowed out her cheeks, creating a rhythmic suction that she knew would drive him crazy as his cock went deeper and deeper into her mouth. “That’s it baby, suck my cock. Shit!” he cried.

She moaned around the cock in her mouth as Cole changed his angle between her legs and increased the pace of his thrusts. The head of his cock was now hitting the sweet spot inside her just right, making her pussy clamp down on his length, sucking him deeper into her slickness just as her mouth was sucking Jared in.

“God damn, Julie, your pussy feels so fucking good!” Cole cried and his harsh words pushed her over the edge. Her climax hit her like a bolt of lightning, shaking her to the core, so much so that Jared’s cock slipped out of her mouth. She screamed loudly with her release, even as Cole’s body stiffened between her legs, her climax triggering his own. Then his hot cum was spilling into her pussy, and she was convulsing beneath him as her own cream rushed out onto his cock. Jared held her and stroked her hair, soothing her as the final tremors rocked her. When Cole finally pulled out of her, she was limp and spent in Jared’s arms. 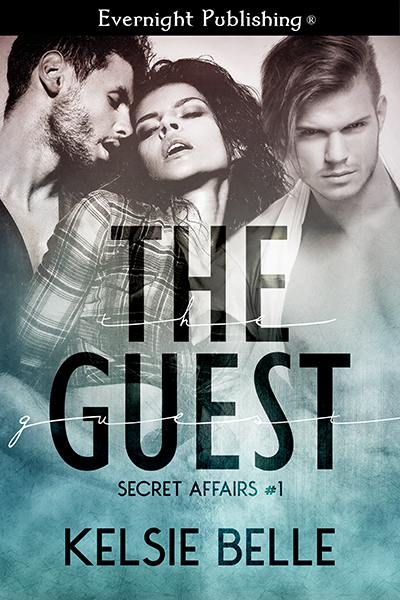 Check me out and come and chat it up with me!

Join my Newsletter for exclusive reads and updates from bestselling authors!