Most of you know me and my infatuation with all things Geek. Second, you know that I am a consummate geek and I have always, and will always be, fine with that moniker. Matter of fact, I love being a kick ass oddball who can tell you about coding on your computer, flip around and write you a contemporary romance, jump and check your engine, toss some random Cos-play pics in there, and then sit my ass down and write some more shifter erotica…all in a day. So when I am aware of an equally amazing woman, she quickly becomes a top dog in my small circle of can’t-live-without friends. That is Sarah Rodriguez. (Sarah The Rebel to most) She’s pretty awesome, and is now one of the authors for Marvel with her Agent Carter: Season 1 Declassified peace, which is a Media Tie-In for the show.

She was awesome enough to agree to let me annoy the living hell out of her for an interview, and I’m excited to share her thoughts and words with you.

Everyone, meet Sarah Rodriguez, the next 1-click author on your Must Buy lists!

Sarah, thanks so much for coming to talk to me today and go over your new project with me! I love you long time, I promise, for this. So for you, what is Agent Carter: Season One Declassified (in your view)

Agent Carter: Season One Declassified is the companion novel to season one of Marvel’s Agent Carter. It’s an essential guide for super-fans of the show.

What attracted you to this project?

How did this project go about getting published?

I had just walked out of an early screening of Mockingjay Part 1 when I noticed I had two missed calls. While I waited for my friend to get out of the restroom, I listened to the voicemail. Then I listened again to be sure they had the right number. Marvel had gotten my name from somewhere and reached out to me to write the book. It turns out my good friend Jennie Kong had passed my name along to her contact as someone for what she thought was a copy editing position.

How do you feel about being a Marvel author, let alone a female one?

I don’t know if I really get to say I’m a Marvel author, let’s say that if they call me back to write the book for Season 2! It doesn’t really feel real. But I’m pretty darn proud.

People are really hoping for a second season of Agent Carter, is there going to be one, or would you have to kill me if you answered?

There is definitely a Season 2 coming up! They announced it just before Comic-Con. The team is moving to LA (which will make filming easier on the crew, who had to transform modern LA into 1940s New York).

What attracted you to Peggy Carter?

Peggy Carter is one of the only female love interests in a Marvel movie who serves as a mentor and inspiration to a super hero. Without her, Captain America would not have gone to save Bucky. When he is in times of crisis (even in Winter Soldier) he looks to Peggy for advice. On top of all of that, she’s actually a strong, intelligent warrior, not a secretary or nurse or journalist: a soldier. She’s one of a kind.

Do you see some of yourself in Peggy Carter (or maybe the other way around since she’s older)?

I wish I was as badass as Peggy! Actually, now that you ask I guess I do relate to her quite a bit. I’m also intelligent and a natural leader, but men tend to ignore me and think they know better. I often refer to myself as “Cassandra” after the Greek myth because of it. It’s probably no coincidence that Cassandra was a woman.

Did you get to be there for any part of the filming process or did you get the call while the first season was already wrapping up? Any interviews or interaction with cast or staff?

I was on set for quite a few shots! I got to be on location at Stark’s airplane hanger, the movie theater and many of the shots in the S.S.R. office. Being on set was really fun! Everyone was so nice and kind and quick to pull me aside and point out interesting things about the filming process. 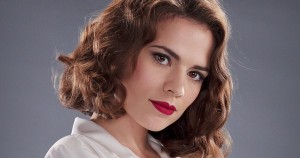 One of my favorite moments was sitting with Sheena Duggal, head of VFX. She sat me down and we went through almost all of the episodes and she showed me before and after VFX were added. It was mindblowing how seemless everything looked

I interviewed more than twenty cast and crewmembers for this book. For the cast, I interviewed Hayley Atwell, Enver Gjokaj, James D’Arcy, Chad Michael Murray, Shea Whigham, Lyndsy Fonseca, Bridget Regan and Ralph Brown. I also interviewed each writer about their episode, and interviewed the show runners Tara Butters and Michele Fazekas.

Interviewing Stephen McFeely and Christopher Markus was especially exciting, because they told me so many cool things that I couldn’t even put in the book! But they are true comic fans and the Marvel characters are in good hands with them.

The first time I met Hayley on set, her eyes lit up and she had tons of questions about the book. And the first time I met James D’Arcy on set was when Hayley said “James have you met Sarah?” and I tried not to die with joy that Hayley had introduced me to someone like I mattered. I have the biggest girl crush on her. 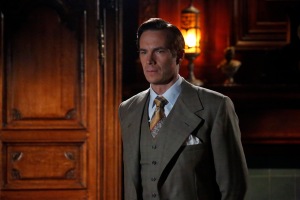 We also talked video games during my interview with her. Hopefully she tried out some of my recommendations. Turns out she’s a Sims fan!

Are you going to be working on other projects for Marvel? Along the lines of Agent Carter: Season One Declassified?

I’m not sure but I hope so!

What are your other writing credits? (If none, then you can answer what are you working on right now?”

For the Geek girl, how have you made this your career?

It’s all about picking a dream and then charting your path. I knew I wanted to work in gaming. So I moved to LA where the gaming community was and networked my butt off until I got the jobs I wanted. I’ve already achieved a few geek girl dreams (doing PR for huge AAA video games, working for Felicia Day etc.) and now I’m moving on to writing. Believe in yourself and be willing to take risks.

I also recommend creating something of your own until you get the job you want. For example, starting my own video game website (NerdyButFlirty.com, which is still going strong under the new editor-in-chief) showed potential employees I was serious and knowledgeable about gaming. It gave me an “in” at numerous events and tradeshows. Find something you can do on your own to show your dedication to the field of your dreams.

For those that don’t know, what sort of articles and things did you have on NerdyButFlirty?

Nerdy But Flirty is a feminist geek website that focused on diversity and female voices. My goal when I created the site was to have a safe space for female games journalists to learn and grow and write about games, and also to have a “by us for us” mentality when it came to reviewing games. A woman reviewing a game for other women can point out things that are mostly only relevant to women. And the same for black gamers and latina gamers. NBF ended up expanding into a wide range of geeky topics, from comics to board games and is now run by Kelsey R.M.

This one is about you: What is your dream project?

My dream project is already going on! Writing my fantasy novel has been my dream since I was ten! But to pick a second one, I would say writing for a big name video game company, such as BioWare or Bethesda.

(I’m totally hoping to get in with SquarEnix but this isn’t about me!) Tell me about this fantasy novel? Is this a major work in progress you plan on making into a series or trilogy? Deets girl, deets (you know gossip mongers need that :D)

I don’t want to share too many details about the novel yet, but it will hopefully be part of a series. I’ve been sitting on the idea (and mentally building it) for over a decade now, and finally felt inspired to start writing it down thanks to a wonderful English professor in college (Bri Spicer). The story centers around a warrior princess. Most of the characters (including the main character) are black women so it’s a little different from a lot of the high fantasy out there.

You do a podcast as well right? What’s that like? What do you cover?

Last year my best friend Catrina and I started a podcast. It’s basically just us talking about geeky things. But as we’re both feminists, cat ladies and lovers of inclusiveness and diversity, it ends up being a podcast about those things as well. It was originally named The Rebel Base Podcast but too many people thought we were a Star Wars podcast! So we changed the name to Woman Up! Podcast. Every other Wednesday at 8pm PT we talk geeky news then focus on a main topic on my twitch channel. Later we upload the video to YouTube and the audio to AllGames.com for people who like to listen on the go.

Sarah Rodriguez is the author of Marvel’s Agent Carter Season One: Declassified, published by Marvel Entertainment and the Co-Host of Woman Up! Podcast, a feminist podcast that focuses on diversity and inclusiveness in the geek community.

A certified geek, Sarah has worked with companies such as Geek & Sundry, Maker Studios and fortyseven. During her stint as a PR specialist, she helped promote games such as Skyrim, Dishonored, Guild Wars 2 and The Sims 3. She also founded a feminist gaming website called Nerdy But Flirty, which is still active.